You are here: Home / michael 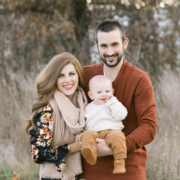 Michael Morefield joined Gashland EPC in May of 2015. He  was born in Kansas City, Missouri, but spent most of his life growing up in Overland Park, Kansas. He married his wife, Lacey, on July 28, 2012 in Castle Rock, Colorado. They met at her older sister’s wedding. They have a son Asher and also a boxer named Moose. Michael double majored in Religion and Communications with an emphasis in Conflict Management from Baker University in Baldwin City, Kansas.  He led a campus ministry for four years during that time. Finally, he attended Covenant Theological Seminary in St. Louis after Baker.

What are your hobbies?

I am a big fan of board games. Some of my favorites are Pathfinders and Gotcha. I also enjoy playing sports. I played soccer in college and continue to play some adult league soccer when my schedule allows it.  I also have a love for the outdoors and going biking, fly fishing, hiking, and kayaking. And since I’m from Kansas City, eating barbecue is also a hobby. Joe’s Kansas City is the best… I mean how can you beat a Z-Man with fries?

I love reading. It’s a big hobby of mine as well and one of my favorite things to do. As far as fiction goes some of my favorites are the Lord of the Rings Trilogy + the Hobbit, the Jason Bourne Trilogy, Harry Potter, Narnia, and the Kingkiller Chronicles. As far as non-fiction books, Knowing Jesus Through the Old Testament  and Far as the Curse is Found has been very transformative in my own walk. The Pastor As Minor Poet is also one of my favorites on pastoral ministry.

What is your favorite movie?

Lord of the Rings Trilogy and the Batman trilogy are probably some of my favorite movies. I also love the Count of Monte Cristo.