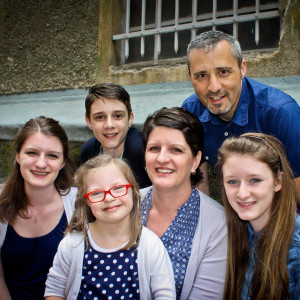 Phil Pace is our Ministry Center Worship Leader and has been working at GPC since 2013. He and his wife Donna were married in 1992 and have four children: Abigail, Elizabeth, Caleb and Phoebe. Phil and his wife both grew up in the same town 50 miles Northwest of Chicago and have seen the Lord call them to some amazing things.

What led you to music ministry?

Immediately after my new relationship with Christ began in my mid-20’s, I was asked to play guitar for a local youth group in a local Presbyterian church. I was subsequently discipled by the youth leader. After eighteen months, I was asked to lead the group because the leader left for seminary in another state. It was at this point that I felt the call of God on my life to one day move into vocational ministry, but I had no idea how to get there. I thoroughly enjoyed teaching the Bible to junior high and high school students and often reflect on the grace of God during those years.

Several years later, I wrestled with this call some more. I returned to school to pursue a bachelor’s degree at Moody Bible Institute. We sold our new home, and moved into downtown Chicago with our then three children. I transferred my job with FedEx to Chicago and continued to work part time while studying full time. It was there that I served for four years in a PCA church, co-leading a worship team. In 2002, during my first year at MBI, I was called to serve in missions as a church planter. We heard about a team being formed for Italy. Upon graduation in 2006, we raised support and finally moved to Genoa, Italy in October of 2007. We served in hospitality and evangelism. Fast forward five years. As the church began to grow and we sensed our time in Italy coming to an end, Avant Ministries asked us to come and work in Kansas City to oversee their missionary preparation program. We agreed and moved to KC in August of 2013.

What are your hobbies?

I love listening to and playing music. This includes everything from classic vocalists from the 1940’s to 80’s music to today’s re-tuned hymns.  I love watching White Sox baseball, (sorry KC Royals fans!), exercising down at Family Fitness, bicycling, watching American Pickers, Downton Abbey, and hanging out at the playground with my daughter, Phoebe. I also love a good sandwich, a good conversation and a great cup of Italian coffee!

What are you favorite books?

I love to read history and good biographies on historical figures/people that mattered as well as theology.

What are your favorite movies?

This is scary as I recently learned that Ritchey shares the same! It’s a Wonderful Life, Back to the Future, most Marx Brothers movies and a good RomCom like Return to Me. That movie has everything in it. Love Chicago and Italy!